Well the road works and new cycle path are well and truly underway. 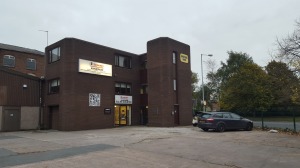 Customers can still get into our car park from Swallow Street off Hillgate as usual. We have experienced very little disruption to our business, though It will make quite a bit of difference to the view outside when it is done.

I am sure the council have done their homework and it will improve the flow of traffic when completed. We will post any news we find on the road works on our blog and social media sites with photos as it changes.

Don’t forget, the clocks go back 1 hour this weekend.

Hi, and welcome to our latest video from Everbuild showing Stixall sealant and adhesive in action.

STIXALL Extreme Power is the ultimate combined building adhesive and sealant, based on hybrid polymer technology, with the most Extreme power to both bond and seal virtually EVERYTHING to ANYTHING in virtually all conditions, even under water or in the rain!

You can see our Everbuild product range by clicking here.

Cookson Hardware is delighted to have supplied all of the traditional design and period finished architectural ironmongery to the restoration of Elizabeth Gaskell’s House, 84 Plymouth Grove, Manchester. Working closely with the Architects we were able to offer products which provided a solution to the period design requirement of the building and to the building regulations of today.

The house was the home of the novelist Elizabeth Gaskell, one of the nineteenth century’s most important women writers, from 1850 until her death in 1865. During this time she wrote most of her famous novels including Cranford, Ruth, North and South and the unfinished Wives and Daughters. Visitors to the house during this time included Charlotte Bronte, Charles Dickens, John Ruskin and conductor Charles Halle.

The house itself was built between 1835 and 1841 and is a rare surviving example of a Regency style suburban villa and is a listed Grade II building.

Following a Heritage Lottery Fund windfall the house has been returned to its former glory with the curators hoping that it will become a firm fixture on the literary tourism map and also offering meeting spaces for schools, community groups and other organisations.

Cookson Hardware Sales Manager Paul Latham said “It is always a pleasure when asked to be a part of the restoration of such an important and historic building such as the Elizabeth Gaskell House. We used oil rubbed bronze furniture and ironmongery in the project, manufactured by British manufacturer Croft Architectural Hardware to achieve the right period feel.”

This is a great product from Everbuild. Watch the video to see how it compares to some other grab adhesives on the market.

The ultimate high grab strength adhesive from Everbuild which is the torque of the trade!

Maximum Torque provides a level of initial grab strength that is double that of most grab adhesives on the market.